Didn’t mean to be so long between posts — it’s been a busy summer and fall — and I’ll be back very soon with some updates of my own. Right now, though, I want to help spread the word about a new literary journal of stories and poetry, aimed particularly at young writers and readers ages 10-18. 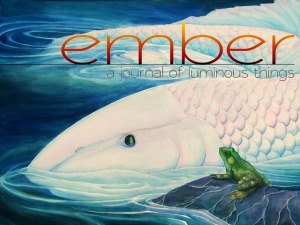 It’s called Ember, and in addition to just plain looking like a gorgeous publication with a worthy purpose, they’re also planning to reprint my story “The Frog Who Swallowed the Moon” in their spring 2015 issue (after it appears first in their sister publication Spark: A Creative Anthology).

They’ve commissioned beautiful cover art for the spring issue, inspired by my story. (I’ve already pledged to get a print of it.) 🙂 Please have a look at their Kickstarter campaign and contribute if you can:

As those of you who’ve read this post already know, I’m something of a notebook junkie, so when I saw Neil Gaiman tweet about a sketchbook Kickstarter, I had to check it out.

I’ve been wondering for a little while if some kind of new sketchbook/journal company was going to come along to be a true competitor for Moleskine. Not in the sense of creating a cheaper version (that’s been done pretty well by a couple of companies now), but in the sense of taking a similar idea but improving on it, particularly in terms of using better materials. (I’ve always hated the Moleskine paper in both the regular notebooks and the sketchbooks; it doesn’t seem to truly take anything well, or at least not any media I use.) And there’s also the aspect that, in trying to appeal to the broadest market possible, the Moleskine brand has gotten… well, kind of diluted. While the pop culture geek in me thinks it’s fun for them to have Star Wars and Lego and Hobbit tie-in versions, the creative iconoclast in me (smaller but vocal) can’t help feeling a bit turned off. Call me a notebook snob, but it’s harder to trade on the elite caché of being the notebook of Picasso and Hemingway when you’ve got Darth Vader on the cover. *shrug*

At any rate, when it comes to being the next sketchbook that all the really cool artists are using, I’ve got my money (literally) on KLINE. I’m impressed by the quality of the materials and construction they’re using (look, actual artist-quality paper and not slick beige stuff!), I love that it’s been created by artists for artists, and while I know I’ll probably wind up doing more writing than art in mine, well, there’ll be that watercolor paper in the back just waiting patiently for something to be done with it.

And their Kickstarter’s a chance to be able to someday say that, yeah, I got one of the very first KLINEs. You know, back before they were trendy and you could buy them anywhere. (*arches eyebrow, sips exotic tea*)

There are still a couple days left to contribute and get your own:

I write fantasy/sf for various age groups (including adults who never quite grew up) and smuggle talking animals into my work whenever I get the chance. If you'd like a taste of what I write, my short story collection Six Impossible Things is free at major ebook retailers, including Smashwords, iBooks, B&N, and Amazon (if they're price-matching at the moment). 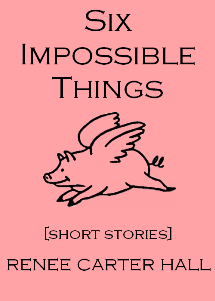 Six Impossible Things - a free ebook collection of six quirky, heartfelt short stories. Click on the cover to get it at Smashwords; also available free on B&N, iBooks, and Kobo (and Amazon, when they're price-matching).