Some of you who’ve been following me for a few years might remember my novella “Signal” when it was published in the magazine STRAEON. That’s out of print now, as far as I can tell—but “Signal” is now available as a standalone book from Goal Publications, as part of their “Pocket Shots” line of small paperbacks.

Click on the cover to go to the order page:

Jak’s curiosity has always set him apart from the other young rakuun, but for the most part his clan has accepted his odd ways—until he finds a mysterious object that just might be a relic of the ones Before.

His discovery sparks an adventure that will lead him far from his home and into the dangerous lands beyond. As dreams and visions of the days Before compel him onward, Jak struggles to find meaning in the sights and sounds flooding his mind. Has his curiosity led him to his people’s destiny, or simply to the destruction of everything he loves?

The book will be released on December 1, but for the next few days it’s still available for the special preorder price. I’m really excited to have this out in book format (how cool is that cover?), and I can’t wait to see what my readers think of it.

(For those of you who prefer digital copies, it’ll also be released as an ebook on December 1 and should show up here when it’s available.)

I’ve also had way too much fun creating a Spotify playlist for Signal. (If you’re not already on Spotify, you’ll need to sign up for a free account to listen to it.) Most of my stories wind up with some kind of soundtrack during the writing process, whether it’s a full playlist or just a single “theme song,” and I love that I can use Spotify to share that with readers… so yeah, likely there’ll be more playlists forthcoming for future (and maybe even past) projects. 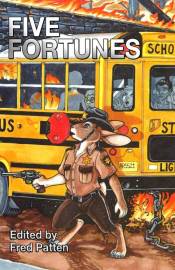 The first time she’d seen them, she had been very young, but she hadn’t been afraid. The other cubs, male and female alike, had hidden behind their mothers, frightened by the huntresses’ fierce eyes and sharp weapons. Where the villagers wore beads or stones, the karanja sported necklaces of bone and hoof and claw, and their loincloths were made of zebra hide in deference to Kamara’s first kill, a material only they were permitted to wear. They were all mesmerizing, exotic and dangerous and beautiful, their eyeshine flashing like lightning-strikes as they took their places around the fire.

The furry anthology Five Fortunes, containing five new novellas from five authors, is now available for pre-order from the publisher!

My contribution, “Huntress,” follows the young anthro lioness Leya as she struggles to become one of her tribe’s warrior women and yet begins to question if it’s truly what she wants. It’s part coming of age, part romance, very much a character-based story, and it’s also kind of my personal rebuttal to the furry fiction that often includes female characters tangentially or not at all. Writing “Huntress” was an emotional experience and a learning experience, both in terms of craft (for one thing, understanding at a gut level the difference between a short story scene and a novel scene) and in terms of challenging myself to complete something on a tight schedule but still to the highest degree of quality I was capable of. I consider it a great success, and while I know I can’t control how it will be received, I hope it finds some sympathetic readers.

The other works included are “Chosen People” by Phil Geusz, set in his Book of Lapism world; “Going Concerns” by Watts Martin, set in his Ranea world; “When a Cat Loves a Dog” by Mary E. Lowd, set in her Otters in Space world; and “Piece of Mind” by Bernard Doove, set in his Chakat Universe. (Yeah, mine is the only one that isn’t written in a storyverse I’d previously created. But you never know — I might return to Leya’s homeland someday for another story or two.)

I write fantasy/sf for various age groups (including adults who never quite grew up) and smuggle talking animals into my work whenever I get the chance. If you'd like a taste of what I write, my short story collection Six Impossible Things is free at major ebook retailers, including Smashwords, iBooks, B&N, and Amazon (if they're price-matching at the moment).

Six Impossible Things - a free ebook collection of six quirky, heartfelt short stories. Click on the cover to get it at Smashwords; also available free on B&N, iBooks, and Kobo (and Amazon, when they're price-matching).